Let Paws Up take you up, up and away in our brand-new, beautiful hot air balloon. You’ll take in all that this breathtaking landscape has to offer in an unforgettable journey across Montana’s Big Sky. At times, you’ll flow smoothly over the rolling terrain like a silent roller coaster—inhaling the intoxicating scent of millions of Ponderosa pines. At other times, you’ll find yourself brushing the soft grey bottom of a wandering cloud or two. Hot air ballooning is an experience. Montana hot air ballooning in the majestic Blackfoot River Valley is the experience of a lifetime.

From New Mexico All the Way to Montana

By the time he entered middle school, he was already serving on a crew alongside his dad, Patrick. He knew early on that he was destined to be a pilot: “I’ve been around it my entire life. I’m passionate about it because it’s not only a lot of fun, it’s also my peace, my home away from home. Ballooning and flying are pretty much my soul. It’s all I think about. It’s all I want to do.”

Chando earned his private ballooning license in 2016 and commercial license in 2019 and placed eleventh out of 275 balloonists in the 2018 Fiesta. Now in his 20s, Chando says he “fully intends to continue his journey based around hot air ballooning and aviation in general.” Here at Paws Up, we’re more than happy to be along for the ride.

Chando completed his first flights at Paws Up in August 2020.

Typically, flights at The Resort reach 1,000 to 2,000 feet, but Chando has flown much higher than that—up to 13,800 feet over the Sandia Mountains near Albuquerque. “During the wintertime, the wind is just right,” Chando says. “As balloonists, we like to challenge ourselves and push our limits. We’ll jump over mountains. We’ll do long-distance flights.”

In fact, Chando prefers to fly during the winter: “Winter is the ideal time to fly. The balloon reacts phenomenally to a burn. In summertime, the balloon moves slower. It’s almost like driving a bus in the summer and a sports car in the winter.” Luckily, flights at Paws Up are offered year-round, depending on weather conditions, and Chando says guests can expect to experience something they’ll want to try again and again. “It’s not a bucket list item to me because you’re going to have a blast doing it,” he says.

And if you want to hear about the history of ballooning on your ride, Chando’s your man. He’s an expert on the sport’s beginnings in France and Ireland: “Ballooning started in 1783—it’s the oldest form of aviation and the safest to this day.” He might even share the Irish Balloonist’s Prayer at the end of a flight: “The winds have welcomed you with softness. The sun has blessed you with its warm hands. You have flown so high and so well that God has joined you in your laughter and set you gently back into the loving arms of Mother Earth.”

Flights normally depart around sunrise for an approximately 1–3 hour flight with 4 or 5 passengers per trip. To book a hot air balloon flight during your stay at The Resort, please contact the Wilderness Outpost at 406-244-7351 or by using the Paws Up App. 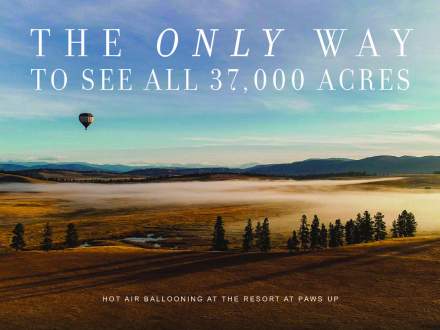